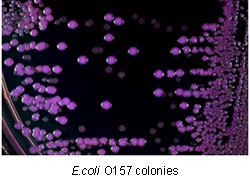 Bacterial resistance – often arising as a result of over, or inappropriate, use of antibiotics – is a major obstacle to the treatment of many bacterial infections. Recently, interference with quorum sensing has emerged as a strategy for the development of new antibiotics which minimises the evolution of drug-resistant strains. Quorum sensing is a process used by bacteria to coordinate gene expression according to local population densities. The bacteria secrete signalling molecules, known as autoinducers, and have receptors that specifically recognize the signalling molecules released by other bacteria of the same or different species. Bacterial cell density and concentration of autoinducers control factors such as expression of virulence factors, pathogenicity and biofilm formation. 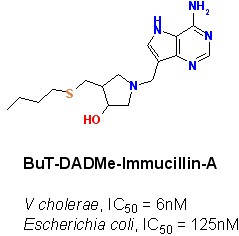 Writing in the journal Nature Chemical Biology, researchers from Albert Einstein College of Medicine of Yeshiva University have recently described the effectiveness of 5′-methylthioadenosine/S-adenosylhomocysteine nucleosidase (MTAN) inhibitors against Vibrio cholera and Escherichia coli O157:H7. MTAN plays a key role in the synthesis of autoinducers essential for bacterial quorum sensing and the absence of the nucleosidase in mammals suggests that it is likely to be an attractive target for antimicrobial drug design. Three transition state analogue inhibitors of MTAN were found to be highly potent at blocking quorum sensing, bacterial virulence and biofilm formation. Importantly, the effect persisted for several generations. 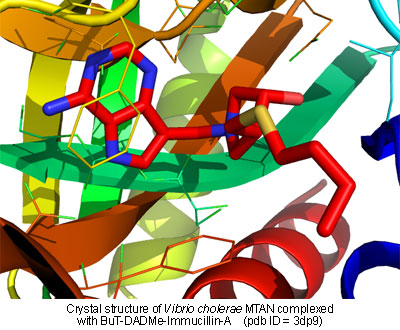