Results of a phase II clinical trial of a novel oral thrombin receptor antagonist (TRA) were published in the March 14th issue of The Lancet.

SCH 530348 met the study’s primary endpoints of safety and tolerability, and caused no increase in major and minor

Thrombolysis in Myocardial Infarction (TIMI)-scale bleeding when given with current standard antiplatelet therapy (aspirin and clopidogrel) for patients undergoing percutaneous coronary intervention (PCI), commonly known as balloon angioplasty, with stenting. Thrombin is a protein with key roles in blood coagulation – as well as activating platelets for aggregation, thrombin is involved in the production of fibrin, a fibrous protein involved in blood clotting and wound healing. Patients with blocked coronary arteries undergoing PCI are at risk of blood clots and are usually treated with anti-clotting drugs such as aspirin or clopidgrel. Although these drugs are effective at preventing blood clots, they increase the risk of bleeding and there is a need for safer drugs to prevent clots during PCI.

The new study, which involved over 1000 patients, was designed to evaluate the safety and efficacy of SCH 530348 in patients undergoing PCI. SCH-530348 acts as an antagonist at the thrombin receptor and reduces thrombin-induced platelet activation but doesn’t interfere with thrombin’s role in fibrin synthesis. Compared to standard-of-care treatment alone, addition of SCH 530348 led to much greater inhibition of thrombin-receptor agonist peptide (TRAP)-induced platelet aggregation in both loading and maintenance doses. 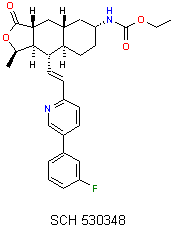 SCH 530348 is related to the natural product, himbacine, and has a complex structure with seven stereogenic centres but can be synthesised efficiently using a diastereoselective intramolecular Diels-Alder reaction which generates the core tricyclic structure. SCH 530348 is being developed by Schering-Plough for the prevention and treatment of atherothrombotic events in patients with acute coronary syndrome and in those with prior myocardial infarction or stroke, as well as in patients with existing peripheral arterial disease. SCH 530348 is currently being evaluated in two large-scale multinational, randomized, double-blind, placebo-controlled Phase III clinical trials.