The cytoskeleton plays a key role in regulating many cellular functions; it maintains cell shape, protects the cell, enables cellular motion, and has important roles in proliferation and differentiation. Metastasising cancer cells exploit the cytoskeleton to produce protrusions that allow them to invade surrounding tissue and enter the blood system from where they can spread to distant tissues and seed new tumours.

The protrusions, known as pseudopodia, are highly specialised ‘feet’ that the cell uses to pull itself forward across the underlying surface. A team led by researchers at the University of California, San Diego has now identified a previously unknown kinase – termed pseudopodium-enriched atypical kinase one or PEAK1 – that regulates the cytoskeleton and plays a central role in the formation of pseudopodia. Preliminary studies in mice suggest that PEAK1 is important during tumour growth and the team also showed that PEAK1 levels are increased in primary and metastatic samples from human colon cancer patients. Whether PEAK1 is capable of transforming non-tumour cells into cancer cells has not yet been determined but the fact that PEAK1 has kinase activity suggests that it may be possible to design specific inhibitors which could help to elucidate its role in both normal and cancer cells. PEAK1, which is a 190-kDa non-receptor tyrosine kinase, could serve as a clinical biomarker that predicts whether a cancer is likely to metastasise and could also be a target for future cancer treatments.

The study is published in the Early Edition of the Proceedings of the National Academy of Sciences.

The deadliest feature of cancer is its ability to spread, or metastasise. Migrastatin, a compound isolated from Streptomyces, was found to weakly inhibit tumour cell migration and, in 2005, researchers from Weill Medical College of Cornell University and the Sloan-Kettering Institute for Cancer Research described simplified analogues of migrastatin, including a compound they called macroketone, that inhibit mammary tumour metastasis in mice. Although the compounds were effective in preventing the spread of cancer cells, it wasn’t known how they achieved this. In a new study, published in the journal Nature, the team have revealed that macroketone exerts its anti-metastatic effect by targeting the actin-bundling protein, fascin. Cancer cells use invasive finger-like protrusions called invadopodia to spread into and degrade extracellular matrix and recent studies have shown that fascin is important for their assembly and stability. Mice implanted with cancer cells and treated with macroketone lived out a full lifespan without any spread of the cancer whilst untreated animals all died from metastases. When treatment was delayed for one week after introduction of the cancer cells, metastasis was still blocked by more than 80%. Macroketone did not prevent implanted cancer cells from forming tumours or growing, suggesting that such compounds would need to be used in combination with chemotherapy drugs acting on the primary tumour. Because fascin is overexpressed in metastatic tumour cells but is only expressed at very low levels in normal epithelial cells, treatments that target fascin should have comparatively little effect on normal cells and may have fewer side effects than other treatments.

X-ray studies showed that macroketone binds to one of the actin-binding sites on fascin which prevents the actin fibres from bundling together and could form the basis for further drug design.

Tau proteins interact with tubulin to stabilise microtubules and are abundant in neurons but less common in non-neuronal cells. Recently, tau proteins have received a bad press because of the association between tangles of hyperphosphorylated tau and Alzheimer’s disease and now researchers at the University of Maryland have reported that tau proteins may also play a role in tumour metastasis. Tau was found to promote formation of extensions of the plasma membrane or ‘microtentacles’ on breast cancer cells which break away from the primary tumour and circulate in the bloodstream. The microtentacles then increase the ability of the cells to attach to the walls of capillaries in the lung and seed new tumours. Tau protein has previously been associated with chemotherapy-resistant breast cancers and a poor prognosis but this is the first time that it has been implicated in metastasis. In the present study involving 102 breast cancer patients, 52% showed tau expression in metastases and 26% showed significantly increased tau expression as the disease progressed.

The team hope that drugs might be identified which will prevent the growth of microtentacles and inhibit tumour metastasis. Although current breast cancer treatments are often effective in treating the primary tumour, they are less effective in treating metastatic cancer which can develop years after the primary tumour is discovered and is the leading cause of death in cancer patients.

The study is published in the journal Oncogene.

Around 85% of all tumours are epithelial in origin and have epithelial markers on the cell surfaces. In breast, ovarian, pancreatic and colon-rectal cancers, metastasis – when cells break away from the primary tumour to initiate a new tumour elsewhere in the body – is often fatal. A process known as epithelial-mesenchymal transdifferentiation (EMT) plays a role in releasing epithelial cells from the surface of solid tumours and transforming them into transient mesenchymal cells which have reduced cell-cell adhesion properties and increased ability to migrate and establish new tumours. It was already known that transforming growth factor-β (TGF-β) induces EMT but the downstream events were unclear.

Scientists in the US have now shown that TGF-β triggers the formation of a protein known as disabled-2 (Dab2) which, in turn, activates the EMT process. An increased understanding of the signalling pathway for modulating EMT could lead to the design of drugs to delay or halt EMT and control tumour metastasis. The discovery may also help to understand the progression of other diseases. 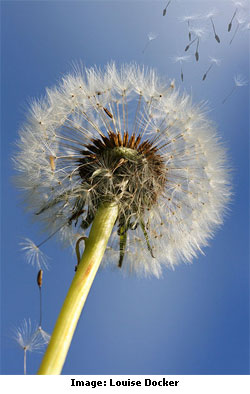