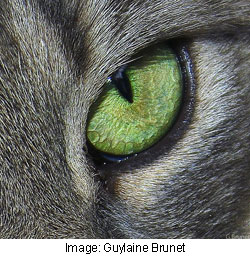 Toxoplasmosis is a parasitic infection caused by the protozoan, Toxoplasma gondii. The parasite is able to infect most warm-blooded animals, including humans, although the primary host is the cat family. Infection is via ingestion of infected meat, cat faeces or through mother-to-child transmission. The majority of infected humans display no symptoms, but those with suppressed immune systems, such as AIDS patients or pregnant women, are at greater risk of developing serious illness. It has been estimated that up to 30% of the World’s population is infected with the parasite.

Following the initial acute phase of infection, a latent phase ensues with the parasite forming cysts in muscle and brain. It is known that infection can modify an animal host’s behaviour and experiments in mice have demonstrated a reduced fear of predators. An increase in levels of the neurotransmitter, dopamine, has been observed in the brains of infected mice. Given the tropism of the parasite for brain tissue, it has long been speculated that Toxoplasmosis in humans may be linked with schizophrenia although no causal relationship has been established.

Scientists at Leeds University have now identified two nearly identical genes in the T. gondii genome with similarity to metazoan tyrosine hydroxylase. Unlike metazoan enzymes of this class, the T. gondii enzymes are bifunctional as they are able to utilize tyrosine and phenylalanine as substrates. Whilst the biological role(s) of a bifunctional tyrosine hydroxylase in T. gondii remain unclear, it is possible that the enzyme is required for supply of tyrosine for protein synthesis. Based on the higher substrate selectivity for tyrosine, however, synthesized tyrosine will be converted to L-DOPA. L-DOPA is the precursor to dopamine and it is plausible that the parasite tyrosine hydroxylase is responsible for the increased dopamine levels detected in the brains of infected rodents.

The full paper is published in the March 11th issue of PLoS One.

One thought on “Is the Cat Driving you Mad?”