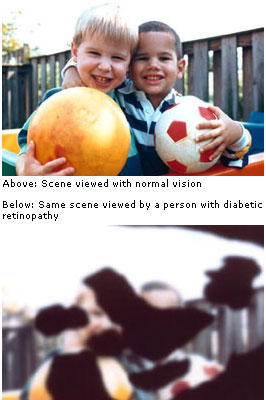 Diabetic retinopathy – damage to blood vessels in the retina – is the most common diabetic eye disease and is a leading cause of vision loss and blindness in those of working age. Increased retinal vascular permeability is characteristic of diabetic retinopathy and can lead to diabetic macular oedema. Hypertension is a major risk factor for diabetic retinopathy and contributes to a variety of other retinal diseases in the absence of diabetes mellitus. Involvement of both the renin-angiotensin system and the kallikrein-kinin system in diabetic retinopathy has been suggested, and there is evidence indicating that angiotensin converting enzyme (ACE) inhibitors and angiotensin II receptor blockers reduce the risk of disease progression, both in the presence and absence of hypertension. Using a specific inhibitor, ASP-440, scientists from the Joslin Diabetes Center and ActiveSite Pharmaceuticals have now demonstrated that inhibition of the protease, plasma kallikrein, may provide a new therapeutic approach for the treatment of diabetic retinopathy.

The study is published in full in the February 1st edition of the journal Hypertension.