Bevirimat is a derivative of betulinic acid, a triterpenoid isolated from the leaves of the Chinese herb, Syzygium claviflorum, which was found to have potent inhibitory activity against HIV-1. Bevirimat shows potent in vitro activity against a broad range of HIV-1 strains, including isolates that are resistant to drugs currently approved for the treatment of HIV-1: protease inhibitor-resistant HIV-1 strains appear to be especially sensitive to bevirimat. Like HIV-1 protease inhibitors, bevirimat interferes with proteolytic processing of the newly translated viral polyprotein, Gag. One of the last steps in viral maturation is cleavage at the capsid-SP1 junction, and bevirimat is believed to prevent cleavage by binding to the Gag polyprotein at this site. Release of SP1 is essential for proper capsid condensation and function: preventing release of SP1 results in non-infectious virions containing abnormal, unstable cores. Bevirimat-resistant strains of HIV-1 can be generated in vitro, but arise more slowly in strains resistant to protease inhibitors than in wild-type strains. Mutations conferring resistance to bevirimat occur at or near the capsid-SP1 cleavage site. 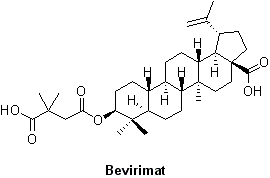 Clinical studies have shown that bevirimat is well tolerated and have demonstrated significant and clinically relevant reductions in viral load in a subset of patients. Studies have suggested that clinical resistance to bevirimat does not develop rapidly, possibly because of selective pressure to maintain the highly conserved capsid-SP1 cleavage sequence. There may also be a greater hurdle to development of bevirimat resistance in strains of virus that are resistant to protease inhibitors, suggesting that patients with such viruses may be especially likely to benefit from treatment with maturation inhibitors such as bevirimat.