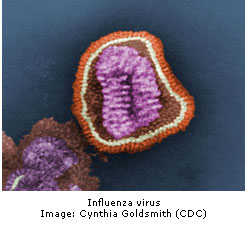 In a study published in the 21st January early edition of the journal PNAS, a team led by scientists at the Scripps Research Institute have shown that sphingosine analogues may be able to prevent some of the lung damage caused by the influenza virus. During infection, the influenza virus directly damages lung cells but further tissue damage is also caused by the immune response that is triggered to clear the virus. T-cells and dendritic cells respond to the virus by releasing cytokines and chemokines, which in turn attract polymorphonuclear leukocytes (PMLs) and macrophages to the infected site. The cytokines and chemokines also activate dendritic cells and trigger T-cell expansion, causing further local damage. Some strains of virus, such as H5N1 (bird flu), can provoke an especially strong immune response – a ‘cytokine storm’ – in which the lungs become so clogged with immune cells that they are unable to absorb oxygen efficiently. Permanent lung damage may result even if the individual survives.

In the study, mice were infected with the WSN strain of influenza and the effect of administration of the sphingosine analogue, AAL-R, directly into the respiratory tract was examined. AAL-R reduced the release of cytokines and chemokines, inhibited infiltration of macrophages and PMLs into the lungs and reduced tissue damage, even if administered 4 days after infection. Levels of anti-influenza antibodies and cytotoxic T-cell responses were unaffected, and viral replication was not increased by administration of AAL-R.

In a previous study, published in the journal Molecular Pharmacology, the team showed that immunosuppression caused by local administration of AAL-R results from modulation of receptors other than S1P1 or S1P2 on dendritic cells in the lungs, and is independent of naive lymphocyte recirculation.

Sphingosine analogues such as AAL-R may be especially effective if used in combination with specific antiviral drugs such as Tamiflu™ or Relenza™, to both reduce viral load and limit damage to the lung.