Researchers from the Wyss Institute for Biologically Inspired Engineering at Harvard University, Harvard Medical School and Children’s Hospital Boston have created a lung-on-a-chip which may help to speed pharmaceutical development by reducing reliance on animal models. The device consists of a layer of human alveolar cells separated from a layer of human endothelial cells by a porous membrane and mimics the boundary between the lung’s air sacs and capillaries. The cells on the chip can also be made to ‘breathe’ by cyclically applying a vacuum to increase the width of the membrane and stretch the cells before allowing them to contract again.

The, lung-on-a-chip has the potential to model the effects of environmental toxins, the inflammatory response to inhaled pathogens and the effectiveness of new drugs. Because the chip is transparent, responses can be captured in real time using high-resolution fluorescence microscopy. When E.Coli bacteria were introduced into the air on the ‘lung’ side of the chip, white blood cells on the ‘blood’ side of the chip migrated through the porous membrane into the air chamber to destroy the bacteria. ‘Breathing’ was found to enhance absorption of nanoparticles, some of which induced an inflammatory response and overproduction of free radicals by the lung cells.

The team are now exploring whether the system can mimic gas exchange between alveolar cells and the bloodstream and believe that the device provides proof-of-principle for the concept that organs-on-chips could replace many animal studies in the future.

Cell culture experiments to screen for compounds that can inhibit cell migration – and potentially metastasis of cancer cells – are typically carried out in a 2-D environment, but researchers at Johns Hopkins University and the University of Washington suggest that results from such experiments may be, at best, misleading. The team has shown that the way in which cells move in a 3-D environment, such as the human body, is different both qualitatively and quantitatively from the way they move in a 2-D environment such as a culture dish. When cells are grown in 2-D, they develop broad fan-shaped protrusions called lamella along their leading edge which help them to move forward. Macromolecular assemblies known as focal adhesions which can last for up to several minutes are also formed. These focal adhesions mediate cell signalling, force transduction and adhesion. In 3-D, the cells take on a more spindle-like appearance, with two pointed protrusions at opposite ends and focal adhesions – if they form at all – are so small and short-lived that they cannot be resolved by microscopy. The authors suggest that the shape and movement of cells in 2-D culture experiments are artifacts of the environment and could produce misleading results in studies to test the effects of drugs on cell motility. This may explain why positive results from cell culture experiments do not always translate into efficacy in animal models.

Even in cell culture systems designed to more closely mimic a 3-D environment, the cells may be only partially embedded in a matrix and produce misleading results. Using live-cell microscopy, the team showed that, when cells are fully embedded in a 3-D matrix, focal adhesion proteins do not form aggregates, but are distributed throughout the cytoplasm. The focal adhesion proteins still modulate cell motility, but not in the same way as in a 2-D environment. Because loss of adhesion and increased motility are hallmarks of cancer cells, it is important to understand cell motility under physiological conditions and to use culture techniques that most closely mimic this.

Out of every hundred investigational cancer drugs that enter clinical trials, only eight prove to be sufficiently safe and effective for FDA approval. Scientists at the Dana-Faber Cancer Institute believe that those odds can be shortened by taking into account neighbouring cells in the tumour microenvironment in preclinical testing.

Although both non-malignant cells and secreted proteins from tumour and stromal cells are recognised to be active participants in cancer progression, early laboratory testing is typically carried out using homogeneous populations of tumour cells. The Dana-Faber group have now developed a tumour cell-specific in vitro bioluminescence imaging (CS-BLI) assay that is suitable for high throughput screening. Cell viability can be measured in tumour cells stably expressing luciferase in the presence or absence of non-malignant accessory cells (for example, stromal cells) or drug treatment.

Unlike conventional screening methods, CS-BLI was able to identify compounds with increased activity against tumour cells interacting with stroma. For example, reversine showed more potent activity in an orthotopic model of diffuse myeloma bone lesions than in conventional subcutaneous xenografts. CS-BLI was also able to identify stroma-induced chemo-resistance such as imatinib resistance in leukaemia cells. The use of CS-BLI should help to identify preclinical candidates that overcome stroma-mediated drug resistance as well as those that can act in a synthetic lethal manner in the context of tumour-stroma interactions, thereby increasing the chances of clinical success.

The study is published in Nature Methods.

High-throughput screening (HTS) to identify small-molecule enzyme inhibitors is standard practice, but the substrate-based assays that are typically used are not available for poorly characterised enzymes. Writing in the journal Nature Biotechnology, scientists at the Scripps Institute have now described a substrate-free method for identifying inhibitors of such enzymes. 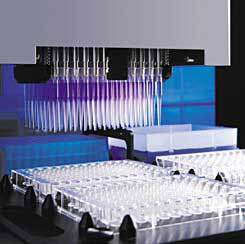 The new technique combines Activity-Based Protein Profiling (ABPP) with Fluorescence Polarisation (FP) to provide a system compatible with HTS methodology. ABPP utilises reactive chemical probes to covalently modify the active sites of enzymes, exploiting catalytic or recognition features of the site. By using ABPP in competitive mode, small molecules can be screened to identify those able to block the covalent modification of the enzyme by the probe. Since the probes are generally applicable to mechanistically related target proteins, parallel screening can be carried out to simultaneously identify selective inhibitors. The downside of ABPP is the low throughput nature, since readouts are typically based on one-dimensional SDS-PAGE gels. However, by combining ABPP with fluorescence polarisation technology (fluopol-ABPP), the Scripps team has greatly increased throughput.

The team reports application of fluopol-ABPP to identify the alkaloid emetine as a selective inhibitor of the hydrolytic enzyme retinoblastoma-binding protein-9 (RBBP9) and electrophilic inhibitors of glutathione S-transferase omega 1 (GSTO1).