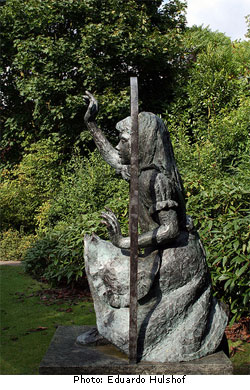 Although some scientists have suggested that carbon-based life forms could exist with either chirality, life has seemingly emerged ‘left-handed’ and all living organisms use predominantly L-amino acids as building blocks. The incorporation of D-Ala and D-Glu into bacterial cell wall peptidoglycans is one exception, with specific amino acid racemases to convert the L-forms to the D-isomers. Incorporation of D-Ala and D-Glu residues into peptidoglycan cross-linkages is believed to confer resistance to degradation by enzymes that selectively hydrolyse linkages between L-amino acids.

Newer research is suggesting broader roles for D-amino acids and a team led by researchers at Harvard Medical School has now shown that bacteria use a more diverse set of D-amino acids than previously thought. They found that a mutant form of Vibrio cholera, the bacterium which causes cholera, produces D-Met and D-Leu, along with smaller amounts of D-Val and D-Ile. These amino acids, when present in the culture medium, were found to stimulate a shape change from rods to spheres, consistent with cell wall remodelling and reduced peptidoglycan synthesis during the stationary phase. A broad-spectrum racemase capable of generating the four D-amino acids was identified in V. cholera and a variety of other bacterial species were found to encode putative racemases and to produce D-amino acids. The specific amino acids identified in stationary phase supernatants varied among bacterial species, with Bacillus subtilis producing both D-Phe and D-Tyr. The team also found that D-Met was incorporated into peptidoglycans of Escherichia Coli and that physiological concentrations of D-amino acids down-regulated peptidoglycan synthesis in B. subtilis, a Gram-positive bacterium that is highly divergent from V. cholera. The study, which is published in the journal Science, shows that D-amino acids released during the stationary phase allow populations of bacteria to synchronise cell wall assembly and composition and may enable coordination of metabolic slowing as nutrients are depleted and toxic products accumulate. Release of D-amino acids can also influence cell wall composition of nearby bacteria and may allow interspecies regulation between bacteria and other organisms that coexist or compete for the same resources.