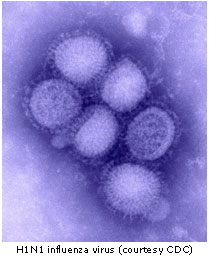 Nexbio have recently presented an update on their new, broad-spectrum candidate for the prophylaxis and treatment of flu, DAS181 (Fludase®) [If this link is not working, please click here]. DAS181 is a recombinant sialidase fusion protein comprising the active domain of Actinomyces viscosus sialidase and a heparin binding sequence derived from the human protein, amphiregulin, to anchor the fusion protein to epithelial surfaces. As well as delivering DAS181 to airway epithelial cells, the anchoring domain may reduce the potential for systemic toxicity by limiting systemic absorption. DAS181 has been shown to be effective both prophylactically and therapeutically against seasonal influenza virus, the highly pathogenic H5N1 avian influenza virus, and multiple strains of parainfluenza viruses. The new study showed that DAS181 is also effective against strains of influenza virus that show resistance to the neuraminidase inhibitor, oseltamivir (Tamiflu®), both in vitro and in a mouse challenge study.

Unlike neuraminidase inhibitors that inhibit the viral neuraminidase, DAS181 prevents viral entry into cells by blocking binding of viral HA glycoproteins to sialic acids on cells in the respiratory tract. Cell-surface sialic acids act as entry receptors for all influenza virus A and B strains as well as for parainfluenza viruses. Antiviral drugs that target viral proteins lead to selection pressures that favour the emergence of resistant strains and it is hoped that targeting a host receptor may reduce the likelihood of resistance. Extensive, prolonged, nonclinical studies are reported not to show the development of any meaningful resistance.

A study carried out in collaboration with researchers at the University of Hong Kong and Imperial College, London and published in the September issue of Antimicrobial Agents and Chemotherapy has shown that DAS181 strongly inhibits infection of human lung tissue and cells by H5N1 virus. This study was also able to resolve mechanistic details of the action of DAS181. Human lung tissue and cells have two receptors that allow influenza virus to enter cells; α2-3-linked sialic acids, to which the H5N1 strain preferentially binds; and α2-6-linked sialic acids, to which the currently circulating pandemic H1N1 strain preferentially binds. DAS181 was shown to remove both α2-6-linked and α2-3-linked sialic acids found in human respiratory tissue from adjacent glycans, thereby suppressing viral entry.

DAS181 is administered by oral inhalation, using a device called ‘Cyclohaler’ and is currently undergoing phase I clinical studies.