The renin-angiotensin system was originally believed to be a relatively straightforward cascade involved primarily in controlling blood pressure and was exploited to provide a number of antihypertensive medicines. Angiotensinogen is cleaved by renin to give angiotensin I (Ang I), followed by further cleavage of Ang I by angiotensin-converting enzyme 1 (ACE) to give the octapeptide angiotensin II (Ang II) which binds to angiotensin receptor 1 (AT1R) or 2 (AT2R). AT1R mediates most of the cardiovascular effects of Ang I and activation leads to increased blood pressure which can be countered by the action of renin inhibitors, ACE inhibitors or AT1R antagonists. 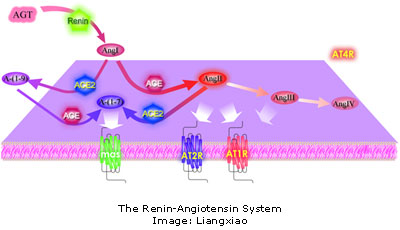 More recently, a parallel pathway in which Ang I is cleaved by angiotensin-converting enzyme 2 (ACE2) to give the heptapeptide, angiotensin 1-7 [Ang-(1-7)], has been discovered. This second pathway, in which Ang-(1-7) binds to the Mas receptor, is believed to act as a counter-regulatory axis to the ACE 1 – Ang II – AT1R axis. Roles have also been proposed for Ang-(1-7) and Mas in kidney disease, liver disease, and spermatogenesis.

Ang-(1-7) is also known to have anti-proliferative properties and to inhibit angiogenesis and researchers at Wake Forest University School of Medicine have now shown that Ang-(1-7) reduces lung tumour growth and inhibits blood vessel formation in mice. The team had previously shown that Ang-(1-7) inhibits the growth of human lung cancer cells in vitro and reduces the size of human lung tumour xenografts in vivo. In the present study, daily subcutaneous administration of Ang-(1-7) for six weeks was found to significantly reduce tumour growth by human lung carcinoma A549 cells and also markedly decrease vessel density compared with saline treated controls. The study, which is published in the August issue of Molecular Cancer Therapeutics, suggests that Ang-(1-7) may provide a novel and effective treatment for lung cancer. The team have also shown that Ang-(1-7) is effective against breast, colon and brain tumours. A clinical trial of Ang-(1-7) has been completed at the School of Medicine and the results are currently being reviewed.