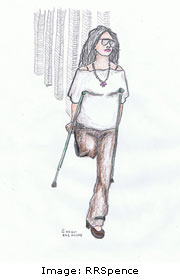 In people with diabetes, damage to peripheral nerves and blood vessels means that wounds can initially go unnoticed, leading to infection, poor healing and, in extreme cases, the need for amputation. Globally, diabetes is one of the leading causes of lower limb amputation and foot problems are one of the most common reasons for hospitalisation of diabetic patients. One of the reasons for poor healing is that diabetic tissue fails to form new blood vessels to reconnect ischemic areas to a blood supply, and researchers at Stanford University School of Medicine and the Albert Einstein College of Medicine have been investigating the reasons for this.

They found that whereas normal fibroblasts – cells that play a critical role in wound healing – increase production of vascular endothelial growth factor (VEGF) in response to low oxygen levels, fibroblasts from diabetic patients did not increase production. They went on to grow healthy fibroblasts in either a low or high glucose environment for four weeks and then subjected the cells to low oxygen levels for 24 hours. The cells that had been growing in the high glucose environment increased VEGF production by only 20%, compared with 200% for the cells grown in the low glucose environment. Production of VEGF is triggered by hypoxia-inducible factor-1α (HIF-1α) acting in concert with the co-activator, p300, and the team further showed that HIF-1α- p300 binding was reduced by 50% in a high glucose environment. High glucose levels initiate a cascade of radical reactions leading to dysfunctional p300 and, since release of protein-bound iron is involved in this cascade, the team reasoned that treatment with an iron-chelating agent should interrupt the chain of reactions. They showed that deferoxamine was able to restore HIF-1α – p300 binding in cell culture experiments and, when they treated small wounds in diabetic mice with topical deferoxamine, the treated mice produced three times more VEGF than untreated animals and their wounds healed in 13 days compared with 23 days for the control group.

Deferoxamine is an iron chelating agent that is administered, usually intravenously, to treat acute iron poisoning, especially in small children. The researchers hope that they will soon be able to determine whether topical deferoxamine promotes healing of wounds in diabetic patients.

The report is published in the July 28th early edition of PNAS.