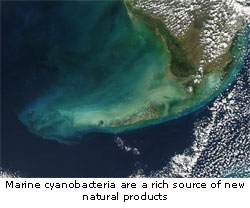 Researchers at the University of California in San Diego have developed computational tools that will allow scientists to quickly and easily determine whether newly isolated nonribosomal peptides (NRPs) are novel or already known. NRPs are a diverse family of secondary metabolites produced by microorganisms such as bacteria and fungi and have a wide range of biological activities: examples of NRPs in clinical use include the antibiotics, penicillin, cephalosprorin and vancomycin; the immunosuppressant, cyclosporine; and the cytostatic drug, bleomycin. NRPs, which are produced independently of mRNA by nonribosomal peptide synthetases, often have cyclic and/or branched structures and may contain non-proteinogenic amino acids as well as numerous other chemical modifications. The lack of genomic DNA information and complex chemical structures have made it very difficult, time-consuming and costly to determine the structure of NPRs, but the new algorithms should replace manual annotations and allow much more rapid characterization. The algorithms are able to calculate the chemical structure of a newly isolated cyclic NRP from fragments generated by mass spectrometry and can be used alongside ‘dereplication’ tools that can calculate the mass spectrometry signature of known NRPs to determine if the newly isolated NRP has already been described.

The study is published in full in the journal Nature Methods, and the web-based tools for sequencing NRPs are available (at no cost to researchers at non-profit organizations) at: bix.ucsd.edu/nrp.