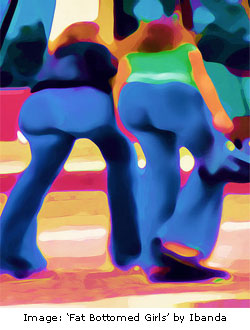 The polypeptide hormone precursor, pro-opiomelanocortin (POMC) undergoes extensive, tissue-specific, post-translational modification to yield a number of peptides with diverse biological activities. POMC neurons in the hypothalamus convert POMC via a multi-enzyme process into the 13 residue α-melanocyte-stimulating hormone (α-MSH1-13). As well as stimulating production and release of melanin in skin and hair, α-MSH1-13 acts on postsynaptic melanocortin receptors in the brain to suppress appetite. In the late 1990s, mutations in MCR4 that prevent α-MSH1-13 signalling were linked to inherited human obesity but, although the pathways leading to activation of MCR4 are relatively well understood, little was known about how signalling is terminated.

Writing in the Journal of Clinical Investigation, researchers at Yale University School of Medicine and the University of California Davis now show that, in mice, α-MSH1-13 is inactivated by removal of the amidated C-terminal valine residue by the enzyme prolylcarboxypeptidase (PRCP). PRCP is a serine protease that cleaves the C-terminal residue from peptides with a penultimate proline residue that also converts the vasopressor peptide, angiotensin II, into the inactive angiotensin 1-7. Mice lacking PRCP had increased levels of α-MSH1-13 in the hypothalamus, were leaner and shorter than normal mice, and did not become obese when fed a high-fat diet. Additionally, icv administration of a PRCP inhibitor, Boc-prolylprolinal, reduced food intake in rats, as did systemic administration to obese, leptin-deficient mice.

On the basis of their studies, the authors propose that regulation of PRCP activity in the hypothalamus may be a target for the treatment of obesity and related disorders but an accompanying commentary cautions that brain-penetrating drugs would need to be developed to be useful for the treatment of obesity. Skin and hair colour could be affected by inhibiting PRCP, as well as levels of the vasoactive peptides, angiotensin II and bradykinin. Since PRCP is widely expressed, there may be other – not yet unidentified – substrates, and inhibitors of PRCP could have other, unforeseen, effects.