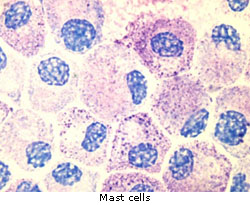 Mast cells are best known for their role in allergic responses but a new study by researchers at Brigham and Women’s Hospital and colleagues has now shown a link with diet-induced obesity and type 2 diabetes. Writing in the July edition of Nature Medicine, they show that mast cells are far more abundant in white adipose tissue from obese humans and mice than in tissue from normal weight individuals. 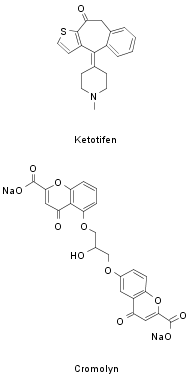 In mice on a high calorie diet, treatment for two months with either of the allergy treatments, ketotifen fumarate or cromolyn, led to significant weight loss and improvement in diabetic markers compared with control animals. More dramatic improvements were seen if the animals were also switched to a reduced fat diet.

In further studies, the team showed that mice which lack mature mast cells neither became obese nor developed diabetes over a three month period, despite being fed a Western diet rich in sugars and fats. As a next step towards possible testing in humans, the researchers plan to study the effect of the compounds on obese and diabetic non-human primates.

Ketotifen fumarate and cromolyn are both used in anti-allergy eye drops, and to prevent asthma attacks. Although both stabilise mast cells, the exact mechanisms by which they achieve this are somewhat different.