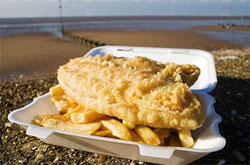 Vinegar can be made from almost any carbohydrate source – the action of yeast first ferments the natural sugars to alcohol which is then converted into acetic acid by acetic acid bacteria. Vinegars typically contain around 5% acetic acid together with a variety of other components including polyphenols and organic acids.

Vinegars have been used for thousands of years as food preservatives and flavourings and, over the years, have also acquired a reputation for many health benefits. The human evidence for many of these claims remains equivocal although several studies have confirmed the anti-glycaemic properties of vinegar.

Largely anecdotal evidence has pointed to positive effects on weight loss and at a recent meeting of the Japan Society of Nutrition and Food Science, scientists at the Mizkan Central Research Institute have now described reductions in waist size, abdominal fat and blood neutral fat in overweight (BMI 25-30) men and women who drank 30mL of an apple vinegar-based drink (containing 1.5g acetic acid) each day for 12 weeks. Those who drank 15mL of the vinegar-based drink also saw reductions, whilst control subjects who did not take the drink saw no changes.

Writing in the Journal of Agricultural and Food Chemistry, researchers at Mizkan have also described studies in mice that highlight the mechanisms responsible for the changes in abdominal fat. Mice on a high-fat diet were divided into three groups and treated with 0.3% or 1.5% acetic acid solutions or water for 6 weeks. The groups treated with the acetic acid solutions consumed the same amount of food as the control group but showed reduced accumulation of body fat (about 10%) and hepatic lipids, with no changes in skeletal muscle weight. Significant increases in the expression of genes for peroxisome-proliferator-activated receptor-α (PPARα) and for fatty acid oxidation- and thermogenesis-related proteins were seen in the livers of the treatment groups. Similar up-regulation of gene expression was observed in vitro on addition of acetate to HepG2 cells. The effects were not observed in cells depleted of α2 5′-AMP-activated protein kinase (AMPK) by siRNA. The authors conclude that acetic acid suppresses accumulation of body fat and liver lipids by up-regulating genes for PPARα and fatty-acid-oxidation-related proteins in the liver via an α2 AMPK mediated process.

If larger clinical studies confirm fat reduction and positive effects on metabolism in overweight humans, vinegar could be set to take a share of a very large weight-loss market.