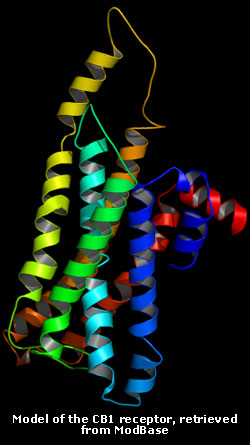 Although cannabis has a long history of use in rituals, as a medicine and as a psychoactive agent, it wasn’t until the late 1980s that the first receptor for the major psychoactive component, Δ9-tetrahydrocannabinol, was identified. This receptor, which came to be known as the CB1 receptor, is expressed mainly in the brain and is responsible for the psychotropic effects of cannabis. Shortly afterwards, a second receptor, the CB2 receptor, was discovered on cells of the immune system. Since then, lipids such as anandamide and 2-arachidonoylglycerol have been shown to be endogenous ligands for cannabis receptors.

More recently, a peptide antagonist of the CB1 receptor was identified, and now US and Brazilian scientists have discovered peptide agonists in the brains of mice. The antagonist, hemopressin (PVNFKFLSH), is a 9-amino acid residue peptide derived from α-hemoglobin and the newly discovered agonists are N-terminally extended variants of hemopressin, incorporating two or three extra amino acids. The peptide agonists were found to activate a signal transduction pathway distinct from that activated by the endocannabinoid, 2-arachidonoylglycerol, or the classic CB1 agonist, Hu-210.

The study, which is published in the FASEB Journal, suggests an additional mode of regulation of endogenous cannabinoid receptor activity, and the authors hope that this could lead to the discovery of new drugs for managing pain, stimulating appetite and preventing cannabis abuse.