The conditions grouped together as cerebral palsy are more common than many people realize and affect about 2 babies in every 1000 in the industrialized world. All types of cerebral palsy are caused by damage to one or more specific areas of the brain which control body movement, posture and muscle coordination. Hypoxia-ischemia (HI)-induced neurological damage before, during, or soon after birth has been implicated as a leading cause of cerebral palsy, and a study in rabbits carried out by researchers at Northwestern University suggests a preventive strategy that may, one day, be feasible for use in humans. In the model, a reduced supply of oxygen from mother to foetus causes an increase in nitric oxide levels in the brain which leads to brain damage and characteristics of cerebral palsy in newly born kittens. 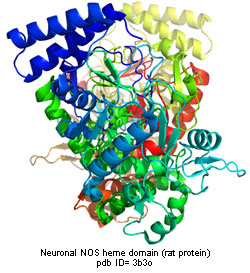 Nitric oxide plays an important role in a variety of physiological pathways and is produced from the terminal atom of arginine by a family of nitric oxide synthase enzymes (NOSs), including neuronal (nNOS), macrophage or inducible (iNOS), and endothelial (eNOS) isozymes. The team wanted to develop selective inhibitors of nNOS which they believed would protect the kittens from ischemic damage but have none of the unwanted effects of non-selective NOS inhibitors. Using structure-based design, two potent and selective inhibitors of nNOS were identified and found to be effective in protecting the kittens from neurological damage caused by hypoxia – none of the kittens born to dams treated with either compound died whereas more than half of those born to untreated mothers died. More than 80% of kittens born to rabbits treated with one of the compounds were normal and almost 70% of kittens born to rabbits treated with the other compound were also free from symptoms. The researchers hope that such compounds could, one day, be used as a preventative strategy for reducing the risk of cerebral palsy in babies born to high-risk mothers. The study is published in full in the journal Annals of Neurology.