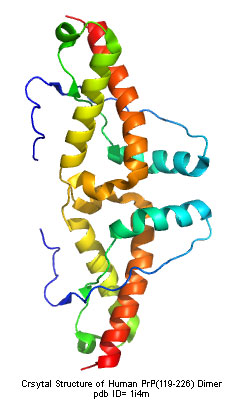 Mis-folded prion proteins have been linked to a number of neurological diseases including scrapie in sheep, bovine spongiform encephalopathy (BSE, “mad cow disease”) in cattle and Creutzfeldt-Jakob disease (CJD) in humans. A new study by researchers at Yale University now suggests a link between normal prion proteins and Alzheimer’s disease. The accumulation of insoluble amyloid plaques in the brain is a hallmark of Alzheimer’s disease. Soluble β-amyloid oligomers also accumulate in the brain and cause damage to neurons and synapses, although precisely how this happens is not clear. Using gene expression analysis, the Yale team identified normal, correctly folded, cellular prion protein (PrPc) as a cell surface receptor for oligomeric β-amyloid. PrPc binds β-amyloid oligomers with nanomolar affinity and the interaction does not require the infectious PrPSc conformation of prion protein that is linked to scrapie, BSE and CJD. Binding of β-amyloid was associated with a specific region on the prion protein and could be blocked by an antibody directed against this site. The team found two other receptors that also bind β-amyloid, but with weaker affinity than PrPc. β-Amyloid oligomers are known to interfere with long term potentiation (LTP), a process that may be linked to learning and memory. In brains from mice lacking PrPc, LTP was not affected by the presence of β-amyloid, suggesting that blocking the interaction between β-amyloid and PrPc may be a new way to treat Alzheimer’s disease. The normal function of PrPc is still under investigation.

The study is published in the February 26th issue of the journal Nature.