Organ transplants save many lives annually, but transplant patients must take immunosuppressive drugs to prevent rejection of the new organ or cells. Two reports now provide new insights into the mechanisms of rejection. Researchers at the University of North Carolina at Chapel Hill School of Medicine and the UNC Lineberger Comprehensive Cancer Center looked at the mechanism of graft-versus-host disease (GVHD), a common but serious complication of bone marrow transplantation in which functional immune cells in the transplanted marrow mount an attack on organs of the recipient, most often the skin, gastrointestinal tract and liver. Interferons had initially been thought to be involved in triggering GVHD, but several studies showed that blocking the action of interferons actually exacerbated the disease. The authors of the present study, which is published in the journal Blood, showed that blocking the action of interferons resulted in a large increase in the number of a specific subset of T-lymphocytes, TH17 cells. When purified TH17 cells were transplanted into mice, they caused a GVHD-like response, with the most severe damage to the lungs and skin. The researchers went on to link the skin damage to production of IL17 and other cytokines and that of other tissues to production of TNF-α. The authors hope that their findings will allow the development of new treatments for GVHD which do not have the harmful side effects of traditional immunosuppressive therapy. 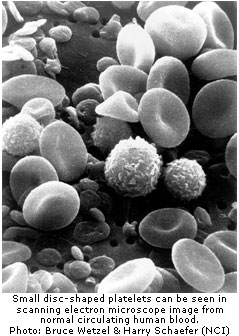 A second report, by scientists at the Johns Hopkins University School of Medicine adds to the mounting evidence linking the activity of blood platelets to organ rejection. When transplants are rejected, platelets line up in the interior of the blood vessels supplying the transplanted tissue and then recruit and activate immune cells to attack the transplanted organ. Treatments aimed at subduing platelet activity could play a role in managing chronic rejection – a major complication for which there is little treatment at present. Craig Morrell, from Johns Hopkins, is author of a comprehensive review of platelets and transplant biology published in the American Journal of Transplantation.

One thought on “New Insights into Transplant Rejection”