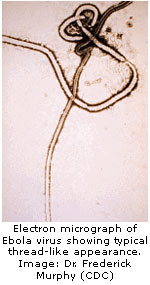 Ebola virus, named after a river in the Democratic Republic of the Congo where it was first identified, causes a severe, often fatal haemorrhagic fever. There is no vaccine against or specific treatment for Ebola virus infection, but researchers at Iowa State University have now moved a step closer to finding a treatment. Using a combination of X-ray crystallography and nuclear magnetic resonance spectroscopy, the group has succeeded in determining the structure of a key portion of the viral protein, VP35, at a resolution of 1.4 Å. The Ebola VP35 protein forms part of the viral RNA polymerase complex, acts as a viral assembly factor, and also inhibits production of host interferon. 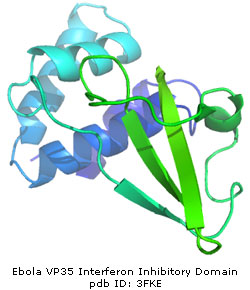 Binding of VP35 to dsRNA correlates with suppression of interferon activity and viral virulence, and the group hopes that the new structure of the interferon inhibitory domain will allow them to design drugs that bind to VP35 and block its function. The protein forms a unique fold with two clusters of basic residues, one of which is important for dsRNA binding and inhibition of interferon production. The study is published in the January 13th issue of PNAS.

One thought on “Structure of Ebola Virus Protein Determined”