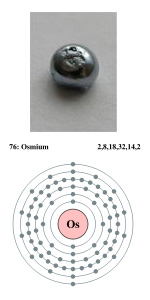 Cisplatin is a platinum-containing compound that is used in combination with other chemotherapy drugs to treat a wide variety of cancers. The mechanism of action of cisplatin involves formation of adducts with DNA. 1,2-Intrastrand adducts involving two guanine bases are most common, although other adducts may also be formed. High mobility group (HMG)-domain proteins then bind strongly to the modified DNA and inhibit repair, leading to apoptosis. Cisplatin was approved for clinical use in the late 1970s and has since been joined by two other platinum-based compounds, carboplatin and oxaliplatin. The two newer drugs cause less kidney damage, ear damage and nausea than cisplatin. Initial responsiveness to cisplatin treatment is high, but many cancer patients relapse as resistance to the drug develops.

Researchers at the University of Warwick have now described the use of osmium-containing compounds for the treatment of cancer. Such compounds have shown promise in several different cancer cell lines, including those derived from ovarian and colon cancers. The compounds do not show cross resistance with platinum-based drugs and, by designing different ligands, the group hope to be able to control the interaction of the compounds with DNA.

The work was presented on 9 December at Bioversity 2008, as part of Genesis 2008, organised by The London Biotechnology Network.