HIV-1 infection is characterized by a wide variety of genetic subtypes in different geographical locations. The predominant subtype found in the western world, clade B, differs substantially from clade C, the main subtype that exists in Africa and Asia. Dementia is common amongst individuals infected with clade B HIV-1, but occurs less frequently amongst individuals infected with clade C HIV-1. Although it had been suspected that the differences in dementia rates were linked to differences in neurotoxicity between the clades, this had been difficult to prove since differences in geographical distribution, differences in host genetics, lifespan following infection or differences in access to antiretrovirals could all affect progression to dementia.

A new study using immunocompromised (SCID) mice has now confirmed the importance of HIV-1 clades in determining the incidence of HIV-associated dementia. The results demonstrate, for the first time, differences in neuropathogenesis between clade B and C HIV-1 isolates in an in vivo model. The study demonstrated that mice infected with representative clade C HIV-1 isolates performed better in cognitive tests than those infected with clade B HIV-1 isolates. Brains of mice exposed to either HIV-1 clade B or HIV-1 clade C showed similar viral loads, but those with clade B HIV-1 showed increased inflammation and neuronal damage.

Using in vitro experiments with purified HIV-1 Tat (Trans-Activator of Transcription) proteins, the team further showed that the differences in neuropathology were linked to structural differences in the Tat protein. Tat from clade C HIV-1 differs from that of other HIV-1 clades in that a highly conserved dicysteine motif (C30-C31) is replaced by a C31S polymorphism. 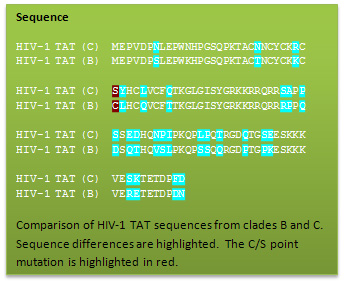 The authors suggest that targeting HIV-1 Tat may be a way to prevent the neurological effects of AIDS, although this may be difficult to achieve in practice. In the early to mid 1990s, there was considerable interest in developing Tat antagonists but, following the unexpected failure of the selective Tat antagonist Ro 24-7429 to show antiviral activity in clinical studies, interest in the approach appears to have waned.