As a target class, kinases have received considerable attention over the last 20 years. There are now 8 kinase inhibitors on the market, approved for use in a number of cancers, with many more in clinical development. Targeting of the catalytic ATP-binding site has proved the most fruitful in drug discovery, but the conserved nature of the site has presented challenges to identification of specific inhibitors. In fact all of the approved compounds inhibit more than one tyrosine kinase, although they maintain selectivity over the serine/threonine and phosphoinositide (PI) kinase classes. This multiple target activity has, however, proven advantageous in an oncology setting. 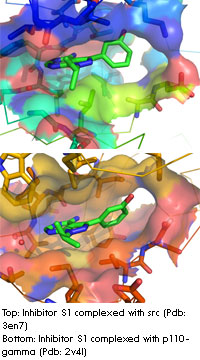 A collaborative group of researchers has recently reported the identification of dual inhibitors of tyrosine and PI kinases. Their rationale for searching for such compounds was the knowledge that reactivation of PI3 kinase signalling is a common mechanism of resistance to tyrosine kinase inhibitors. Furthermore, preclinical studies combining tyrosine and PI kinase inhibitors have demonstrated efficacy. Despite the sequence dissimilarity between tyrosine and PI kinases, the scientists were able to identify a number of molecules with novel selectivity profiles. In addition, one compound was discovered with unexpected specificity for mTOR compared to other members of the PI kinase family. Full details are reported in Nature Chemical Biology.