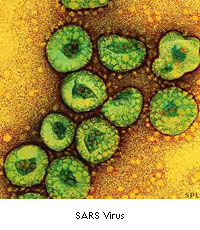 The first cases of severe acute respiratory syndrome (SARS), which is caused by the SARS coronavirus (SARS-CoV), are thought to have occurred in Guangdong province in southern China in November 2002. The virus quickly spread around the globe, with the total number of cases exceeding eight thousand by the summer of 2003. Although this outbreak was contained, the rapid transmission and high mortality rate of SARS prompted an investigation into the viral lifecycle and a search for effective antiviral agents.

A recently published report in the journal PNAS describes the discovery of a potent inhibitor of the SARS coronavirus papain-like protease (PLpro). As well as proteolytic processing of the viral polyprotein, the protease is able to cleave ubiquitin and ISG15 conjugates, and also plays a significant role in allowing the virus to evade the immune system. Optimisation of an initial screening hit led to the identification of a non-covalent inhibitor, GRL0617, which inhibits PLpro with an IC50 of 600nM and inhibits replication of SARS-CoV in Vero E6 cells with an EC50 of 15µM. The X-ray crystallographic structure of GRL0617 bound to PLpro shows the compound binding within the S4-S3 subsites and inducing a loop closure that prevents catalysis at the active site.

Although SARS does not pose a current threat, the identification of GRL0617 shows that inhibition of PLpro is a viable target for the development of antivirals against SARS-CoV.