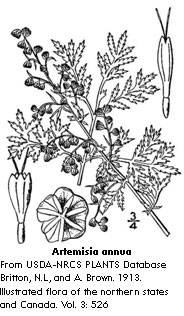 Sweet Wormwood (Artemisia annua L) has been used since ancient times in Chinese herbal medicine to treat fever. More recently, the active ingredient, artemisinin, has been used to treat malaria, and herbal extracts have shown activity against some types of cancer.

Researchers at the University of Washington have now found a way to effectively target artemisinin to cancer cells. Artemisinin’s toxicity to cancer cells is linked to the requirement of tumour cells for large concentrations of iron to support rapid cell division.

It is believed that, when artemisinin comes into contact with high iron concentrations, the peroxide bond is reduced, resulting in a cascade that leads to the production of cytotoxic reactive oxygen species. Transferrin is a protein that is involved in the transport of iron into cells and cancer cells express large numbers of transferrin receptors on their surfaces. By linking artemisinin to a peptide recognised by transferrin receptors, the researchers have found a way to enable artemisinin to be co-internalised with iron-carrying transferrin and generate cytotoxic radical species within the cell. Since the mechanism involves a general property of cancer cells, it could form the basis for treatment of a range of different cancers.