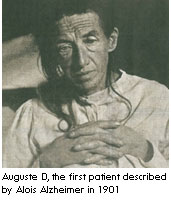 Alzheimer’s disease is characterised by the presence of neurofibrillary tangles and deposits of amyloid peptides (Aβ) in the brain. N-terminally truncated and pyroglutamate-modified Aβ peptides (Aβ(pE)) are resistant to proteolysis, aggregate more readily than the unmodified peptides, and have been implicated in the initiation of events leading to the development of Alzheimer’s disease. In post mortem examinations, brains from Alzheimer’s patients were found to contain significantly larger amounts of pyroglutamate-modified peptides than brains from aged controls. Aβ3(pE)-42, particularly, is a major component of Aβ deposits in both familial and sporadic Alzheimer’s disease. 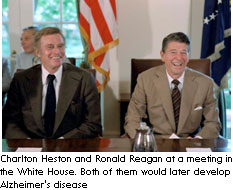 A recent letter to the journal Nature identifies glutaminyl cyclase as the enzyme which catalyses the N-terminal pyroglutamate formation in vivo. Glutaminyl cyclise protein and mRNA were found to be up-regulated in Alzheimer’s disease patients and significantly larger concentrations of Aβ3(pE)-42 were also detected. In HEK cells co-expressing amyloid precursor protein (APP) and glutaminyl cyclise, formation of Aβ3(pE)-42 was suppressed by the glutaminyl cyclase inhibitor, PBD150. Different studies looking at the effect of oral dosing of PBD150 to transgenic mice over 3, 6 or 10 months showed dose-dependent decreases in Aβ3(pE)-42 and reduced de novo plaque formation. Transgenic mice treated with PBD150 also showed improved memory as determined by a conditioned fear procedure.

The results suggest that formation of Aβ3(pE)-42 can be reduced by inhibition of glutaminyl cyclise without any effect on previously formed deposits and provide evidence that Aβ3(pE)-42 can act as a seed for aggregation. If inhibition of glutaminyl cyclise is similarly effective in humans, this could provide a new approach to disease-modifying treatment for Alzheimer’s disease.