The study is published in PNAS.

Chikungunya is a viral disease spread by mosquitoes which causes fever and severe joint pain – the name derives from a verb meaning ‘to become contorted’ and describes the appearance of sufferers bent with pain. Chikungunya is an alphavirus of the family Togaviridae and is usually spread by Aedes aegypti mosquitoes. In 2005-2006, however, a point mutation in one of the viral envelope genes facilitated transmission by Aedes albopictus (tiger mosquito), increasing the risk of outbreaks in areas where the Asian tiger mosquito is present. In the coming years, expansion of the ranges of mosquitoes and changes in insect vectors could increase the spread of Chikungunya virus and other arboviruses.

There is no cure for Chikungunya and treatment is focussed on relieving symptoms. There is also no commercially available vaccine but researchers in the US have now developed an experimental vaccine using non-infectious virus-like particles (VLPs). Selective expression of viral structural proteins produced VLPs that resemble replication-competent alphaviruses and immunization with these VLPs led to neutralizing antibodies against envelope proteins from alternative Chikungunya strains. Rhesus macaques produced high-titre neutralizing antibodies that protected against viremia after high-dose challenge. When the monkey antibodies were transferred into immunodeficient mice, they protected against subsequent lethal viral challenge, indicating a humoral mechanism of protection. VLPs could potentially be developed to offer protection from other alphaviruses such as O’nyong’nyong virus, Ross River virus and Barmah Forest virus. Virus-like particle based-vaccines against human papillomavirus and hepatitis B virus have already been approved by the Food and Drug Administration.

In 1984, shortly after the confirmation of HIV as the causative agent of AIDS, the then United States Health and Human Services Secretary declared that a vaccine would be available within two years. Despite intensive efforts in many laboratories around the world, more than two decades later this ambition has still not been fulfilled.

In 2007, the unexpected and unequivocal failure of one of the largest clinic trials of a vaccine against HIV caused widespread disappointment and dismay but, writing in the journal Nature Medicine, researchers in the United States have now described a vaccination strategy that protects monkeys against infection with the simian immunodeficiency virus (SIV). 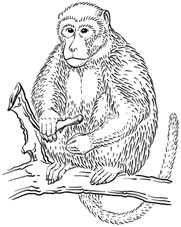 Instead of trying to stimulate a response from the immune system as with previous vaccines, the new approach delivers genes for antibody-like proteins. The research team first created molecules known as immunoadhesins which bind to SIV and prevent it from infecting cells. After showing that these were effective in cell culture experiments, DNA encoding the SIV-specific immunoadhesins was injected into the monkeys’ muscles using an adeno-associated virus carrier system. The DNA then began to produce immunoadhesins that entered the blood circulation and protected the monkeys from infection. One month after treatment, the majority of the immunised monkeys were protected from infection following challenge with live SIV and all were protected against AIDS. In contrast, unimmunised monkeys all became infected and two thirds died from AIDS complications. High concentrations of the SIV-specific immunoadhesins remained in the immunised monkeys’ blood for over a year. The team hope that long-lasting and complete protection against HIV might also be achieved in humans and are planning initial clinical studies using neutralising antibodies based on those produced by the handful of people who have remained healthy despite long term infection with HIV.