The ubiquitin-proteasome system (UPS) is a critical element of the cellular machinery, responsible for removing unwanted proteins. Target proteins, which may be misfolded, oxidised or simply no longer required, are marked for degradation by attachment of ubiquitin chains. The ubiquitinated proteins are then recognised by the proteasome and subjected to proteolytic cleavage. Failure of the UPS leads to a build up of damaged or misfolded proteins that may result in cellular toxicity.

Accumulation of misfolded proteins is a feature of a number of human disorders including Alzheimer’s, Parkinson’s and Creutzfeldt-Jakob diseases. Upregulation of the UPS is therefore of interest for potential therapy of these disorders.

A team from Harvard Medical School has been investigating the role of Usp14, a de-ubiquitinating enzyme associated with the proteasome. They found that Usp14 is able to inhibit the proteasomal degradation of ubiquitin-protein conjugates both in vitro and in cells. A catalytically inactive variation of Usp14 had reduced inhibitory properties, suggesting that Usp14 mediates its effects by cleavage of ubiquitin from the substrate proteins.

The team identified a small molecule inhibitor of Usp14 using high-throughput screening and treatment of cultured cells with this compound enhanced the degradation of proteasome substrates associated with neurodegeneration. The compound also accelerated the degradation of oxidised proteins and improved cellular resistance to oxidative stress.

The study, published in Nature, sheds light on a poorly understood aspect of the UPS – the control of the speed of protein degradation. The authors suggest that inhibition of Usp14 may be a strategy to address a variety of human diseases where accumulation of aberrant proteins is a factor.

The ability of Mycobacterium tuberculosis (MTB) to establish latent infection poses significant problems in the treatment of TB, but a team of scientists led by researchers at Weill Cornell Medical College have now discovered compounds that are able to kill the bacterium in its dormant state. Unlike most other antibacterials, which inhibit the synthesis of bacterial proteins, the newly identified compounds inhibit protein degradation.

Oxathiazol-2-ones, such as GLR5 and HT1171, were shown to selectively and irreversibly inhibit the proteasome of MTB, whilst having little effect on the human proteasome and showing no apparent toxicity to mammalian cells. The compounds were further shown to act as suicide-substrates which cyclocarbonylate the active site threonine of the bacterial proteasome. X-ray crystallographic studies revealed major conformational changes that protect the inhibitor-enzyme intermediate from hydrolysis, allowing formation of an oxazolidin-2-one and preventing regeneration of active protease. Some of the many amino acid residues involved in the conformational changes are remote from the active site pocket and are different from those in the human proteasome, which may account for the selectivity of oxathiazol-2-ones for the bacterial system.

The study was published online on September 16th in the journal Nature. 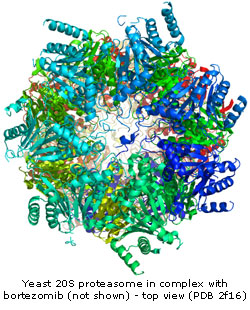