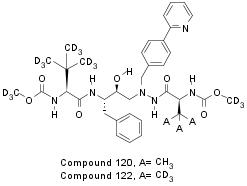 The Kinetic Isotope Effect (KIE) refers to the dependence of rate of reaction on the isotopic identity of an atom participating in the reaction. The largest effect is observed when the isotopic replacement is made to an atom involved in bond breaking or formation in the rate-limiting step – a primary isotope effect. When the isotopic substitution is made to an atom that does not participate in the rate-determining step, the magnitude of the effect is smaller – a secondary isotope effect. This property has long been used in the elucidation of reaction mechanisms.

The KIE is most pronounced when the relative mass change of the substituted isotope is large. For example, a change from hydrogen to deuterium represents a 100% increase in mass, whilst a 12C to 13C change represents only an 8% increase. Reactions involving C-H bonds are typically 6-10 times faster than the corresponding C-D bonds, whereas a reaction involving 12C is only marginally faster than the corresponding 13C reaction.

In addition to its utility in elucidation of reaction mechanisms, deuterium has also found application as a non-radioactive isotopic tracer for studying metabolic pathways. Because of the KIE, however, care has to be taken that the substitution does not modify metabolism. Turning this property to advantage, two US companies are targeting deuterated versions of clinically proven drugs to identify analogues with improved properties. 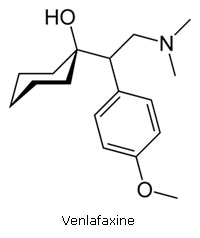 In October 2008, Auspex Pharmaceuticals announced positive results from its Phase 1 clinical trial of SD-254, claiming the first validation in humans of targeted deuterium substitution. SD-254 is a deuterium substituted version of venlafaxine, a selective serotonin-norepinephrine reuptake inhibitor (SNRI). The trial indicated a superior pharmacokinetic profile for SD-254 compared to venlafaxine. 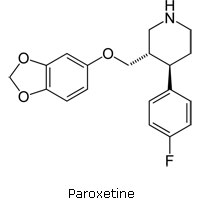 At around the same time, Concert Pharmaceuticals reported preclinical data on CTP-347, a deuterium substituted version of the selective serotonin reuptake inhibitor (SSRI), paroxetine. CTP-347 is being developed to treat vasomotor symptoms (hot flashes) caused by tamoxifen treatment or the menopause. CTP-347 does not cause mechanism-based inactivation of CYP2D6 at clinically relevant concentrations and may be more suitable for co-administration with tamoxifen which is activated by metabolism by CYP2D6. CTP-347 is currently in Phase I clinical testing.

Both companies have numerous other deuterated compounds in their pipelines targeting a wide range of therapeutic indications.