Cancer stem cells (CSCs) have been identified in a variety of tumour types, including breast tumours, and have been proposed to be responsible for recurrence, resistance to chemotherapy and, perhaps, metastasis of cancers. Targeting of these CSCs in the treatment of cancer is therefore of great interest. The ability of the ionophore antibiotic, salinomycin, to kill breast tumour CSCs was recently reported and now collaborators from the University of Michigan Comprehensive Cancer Center and the Centre de Recherche en Cancérologie de Marseille have identified a new potential drug target.

In this latest study the team identified overexpression of CXCR1, the receptor for interleukin-8 (IL-8), by the CSC subpopulation in a breast cancer cell line. Furthermore, addition of recombinant IL-8 increased the CSC population and enhanced the propensity for invasion. Conversely, use of CXCR1-blocking antibodies or repertaxin, a small-molecule CXCR1 antagonist, selectively depleted the breast CSCs both in vitro and in murine xenograft models.

The authors of the study, published in the Journal of Clinical Investigation, suggest blockade of CXCR1 as a novel target for depletion of CSCs, potentially enhancing the efficacy of chemotherapeutic regimes. 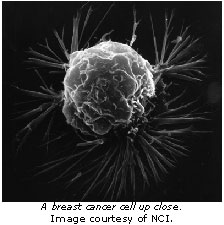 Cancer stem cells are slowly dividing tumourigenic cells that possess characteristics of normal stem cells. It has been proposed that these cells persist in treated tumours and are responsible for tumour re-growth and metastasis. As a consequence, more effective chemotherapy may be achieved by targeting these cells in addition to the rapidly proliferating tumour cells. So far, the difficulty has been the lack of understanding of cancer stem cells and how they might be selectively targeted over normal stem cells. 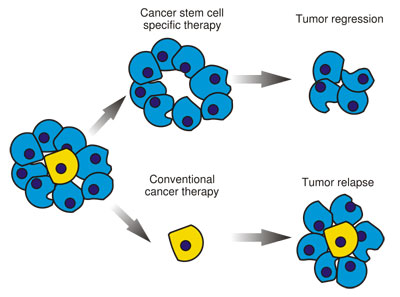 In research carried out at The Jackson Laboratory in mice, Alox5 (5-Lipoxygenase) has been shown to be essential for development and maintenance of cancer stem cells in bcr-abl dependent chronic myeloid leukemia (CML). CML did not develop in mice without the Alox5 gene as a result of impaired function of the leukemia stem cells. Importantly, the lack of Alox5 did not affect normal stem cells, indicating distinct pathways in normal and leukemic stem cells for differentiation and self-renewal.

Alox5 is known to be essential for processing fatty acids to leukotrienes, key components of the inflammatory response, and inhibitors of Alox5 have been developed for the treatment of asthma. Using the approved (for asthma) Alox5 inhibitor, Zileuton, the scientists at The Jackson Laboratory were able to demonstrate a greater therapeutic effect in the CML model than the gold standard, Gleevec. Combining the two therapeutics provided an even better response.

The full study is published in the journal Nature Genetics.

Alox5 has also been shown to be over-expressed in certain cancers, for example in colon cancer. The availability of a clinically approved Alox5 inhibitor should enable a rapid progression to clinical studies in cancer.