Debilitating muscle wasting or cachexia affects the majority of patients with advanced cancer but although the condition is believed to contribute to cancer-related deaths, the precise mechanisms by which cancer causes cachexia and those by which cachexia contributes to a poor prognosis are ill understood. There are currently limited treatment options for patients with cachexia, but scientists at Harvard Medical School and Amgen Research have now created a decoy receptor that can reverse cachexia in mice and increase survival, even though it has no effect on tumour growth.

ActRIIB is a high affinity activin type 2 receptor that mediates signalling by a subset of TGF-β family ligands, including myostatin, which inhibits muscle cell differentiation and growth, and activin, which is abundant in some cancer patients. Activation of ActRIIB initiates a signalling cascade that leads to increased degradation of myofibrillar proteins through the ubiquitin-proteasome pathway. In several mouse models of cachexia, administration of soluble ActRIIB (sActRIIB) was found not only to prevent further wasting but also to fully reverse both skeletal muscle loss and atrophy of the heart. Treatment with sActRIIB had no effect on fat mass or tumour growth and did not reduce elevated inflammatory cytokines, although it did stimulate feeding.

The study, which is published in the journal Cell, suggests that blocking the ActRIIB pathway has the potential to treat various muscle wasting diseases, particularly cancer cachexia, and if the results of the mouse studies translate to people, could also prolong the lives of cancer patients. 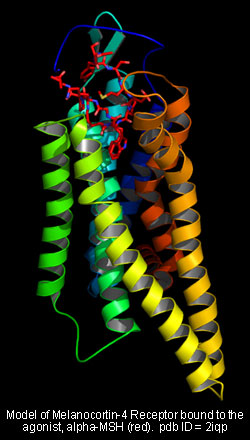 Cachexia affects many different chronically ill patient populations, including those with cancer. It results in loss of body weight, particularly of lean body mass (LBM), and is estimated to be responsible for over 20% of all cancer-related deaths. Currently, available drugs are ineffective, and new therapies are urgently needed. The anorexigenic peptide, α-melanocyte stimulating hormone (α-MSH), is believed to be crucially involved in the normal and pathologic regulation of food intake and it was speculated that blockade of its central physiological target, the melanocortin-4 receptor (MC4R), might provide a promising anti-cachexia treatment strategy. The idea is supported by animal studies with agouti-related protein (AgRP), the endogenous inverse agonist at the MC4 receptor, which was found to affect two hallmark features of cachexia: to increase food intake and to reduce energy expenditure.

In 1998, it was reported that MC4R mutations were associated with inherited human obesity. MC4R mutations have a prevalence of 1-2.5% in people with body mass indexes greater than 30, making it the most commonly known genetic defect predisposing people to obesity.

Full details of the study are published in the journal PLoS One.