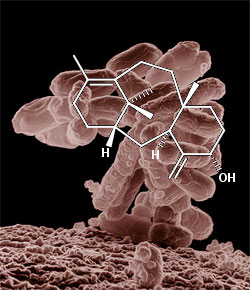 Preparations from the opium poppy, papaver somniferum, have been used for thousands of years to relieve pain. In the early 1800s, Sertürner isolated one of the constituent alkaloids, morphine, which was later shown to be almost entirely responsible for the analgesic activity of crude opium extracts. Since then, morphine and other opiates have been shown to bind to specific receptors, leading to speculation that mammals may be able to biosynthesise morphine. It has also been recognised that humans excrete small but steady amounts of morphine in their urine, but it has been unclear whether this comes from dietary sources or whether the presence of morphine in urine provides evidence that people can actually biosynthesise morphine. The discovery of the simple isoquinoline alkaloid, tetrahydropapaveroline (THP), which can be formed from catecholamines, in both human and rodent brain and in human urine also suggested a possible biosynthetic linkage.

A team led by Nadja Grobe from the Donald Danforth Plant Science Center and Marc Lamshöft from the Institute of Environmental Research, University of Technology Dortmund have now shown conclusively for the first time that mammals are able to synthesise morphine. When either unlabelled or deuterated THP, a potential precursor of morphine, was administered to mice, analysis of their urine showed that the compound had been extensively metabolised. Salutaridine, a known biosynthetic precursor of morphine in the opium poppy, was found amongst the metabolites and when deuterated salutaridinol, the biosynthetic reduction product of salutaridine, was administered to the mice, it was shown to be converted to deuterated thebaine, which was excreted in their urine. Deuterated thebaine was also administered and deuterated morphine together with the related compounds, codeine and oripavine, was recovered in urine.

The study, which is published in the journal PNAS, provides the first evidence that mammals have the capacity to convert THP, known to be present in the brain, into morphine. Although the pathway has now been shown to exist, it is still not clear whether mammals naturally produce morphine as an analgesic.