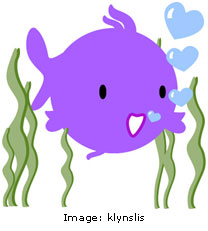 P-glycoprotein (Pgp), with its ability to transport a wide range of xenobiotic compounds – including drug molecules – across cell membranes, is the bane of medicinal chemists. Pgp, which probably evolved as a defense mechanism against toxic substances, is an ATP-dependent integral membrane protein that is particularly highly expressed in cells of the gut and kidney, and also in capillary endothelial cells that make up the blood-brain barrier. This means that as well as preventing absorption of drugs from the gut after oral dosing, Pgp can limit entry of drugs into the brain. Expression of Pgp by tumour cells also results in decreased accumulation of anti-cancer drugs in the cells, and contributes to multi-drug resistance in chemotherapy. 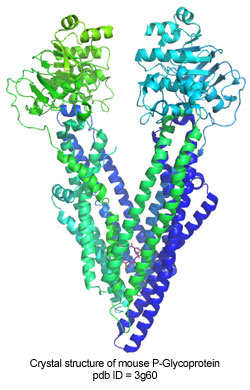 A team led by scientists at the Scripps Research Institute have now succeeded in solving the X-ray crystallographic structure of murine Pgp, a result that they hope will help chemists to design more effective drugs. The 3.8Å structure of the apo protein revealed an internal cavity of ca 6000Å3, with a 30Å separation of the two nucleotide-binding domains. Two additional structures with bound inhibitors showed that hydrophobic and aromatic amino acids form distinct drug-binding sites which are capable of stereo-recognition. The apo and drug-bound Pgp structures are open to the cytoplasm and the inner leaflet of the lipid bilayer for drug entry, representing initial stages of the transport cycle. The overall structure of Pgp is very similar to that of the bacterial protein, MsbA, which transports lipids out of bacteria, suggesting that Pgp may work in a similar way. In the bacterial transporter, binding of ATP changes the accessibility of the carrier from cytoplasmic (inward) facing to extracellular (outward) facing so that substances caught inside the cavity are ejected from the cell. The cavities of both transporters are lined with hydrophobic amino acids, but Pgp contains a larger number of highly varied amino acids which perhaps explains its broader substrate specificity.

The study, which is published in full in the journal Science, should help chemists to better understand, if not tame, the beast.