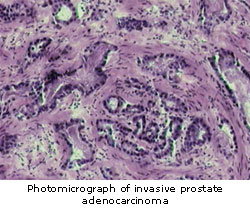 A number of human cancers are linked to viral infection including cervical cancer (human papilloma virus), liver cancer (hepatitis B and C viruses), and lymphoma (Epstein Barr virus). The human retrovirus, XMRV (xenotropic murine leukemia virus-related virus) has previously been found in prostate cancers – most often in men with a defect in the antiviral defence protein, ribonuclease L – but, since only malignant tissues were analysed, a direct association with prostate cancer was not established. In a study published in the September 7th online edition of PNAS, researchers at Columbia University and the University of Utah have now analysed specimens from 233 cases of prostate cancer for the presence of XMRV and compared them with 101 benign control specimens. XMRV infection was found to be associated with prostate cancer, especially with more aggressive tumours, and infection was also found to be independent of reduced activity of ribonuclease L. The virus was detected in 27% of prostate cancer specimens compared with 6% of benign tissue samples and was found almost exclusively in malignant cells.

XMRV is a member of the gammaretrovirus family, other members of which are known to cause cancers in rodents, cats and primates. The study suggests that XMRV infection could contribute to the development of human prostate cancer, although the mechanism by which the virus transforms cells remains to be fully elucidated. As with other retroviruses, XMRV integrates into host DNA and it may be that it inserts close to a gene that regulates cell growth. XMRV was found to replicate efficiently in a cell line derived from human prostate cancer but not in other human cell lines, suggesting a viral tropism that needs to be investigated further. If further studies provide a causal link between XMRV and the development of prostate cancer, opportunities for diagnostic tests, antiretroviral therapy, or ultimately a vaccine against prostate cancer, could follow.