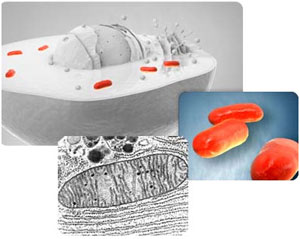 The observation that cancer cells have a high rate of glycolysis, even in the presence of oxygen, was first made by Otto Warburg in 1924. Warburg assumed that the reason for this was a mitochondrial malfunction in cancer cells that drove a dependency on anaerobic glycolysis to generate ATP. Subsequently, it has been shown that the Warburg Effect is in operation even in cancer cells with intact mitochondria. It has been hypothesised that cancer cells exploit the less efficient glycolytic route to ATP to meet the high energy requirements of rapid proliferation and/or to provide a defence against the highly oxidative environment in which they survive. Indeed, increased glucose metabolism provides cancer cells with high levels of antioxidants, ATP and metabolites for growth. Down-regulation of mitochondrial activity further protects cancer cells from apoptosis. Understanding of the mechanisms underlying the Warburg Effect is still far from complete (recently reviewed), but the pathways remain an intense area of study to identify new approaches to cancer chemotherapy.

Scientists at the Translational Medicine Branch, National Heart, Lung, and Blood Institute, National Institutes of Health and Kyoto Prefectural University of Medicine, Kyoto have now reported that ablation of mitochondrial respiration markedly increases expression of Polo-like kinase 2 (PLK2). In these cells, PLK2 is required for in vitro growth and the PLK2-mediated phosphorylation of Ser-137 of Polo-like kinase 1 (PLK1) is sufficient for survival. The researchers also showed that, in vivo, knockdown of PLK2 in an isogenic human cell line with a modest defect in mitochondrial respiration eliminated xenograft formation, indicating that PLK2 activity is necessary for growth of cells with compromised respiration.

The study is reported in the August 11th early edition of Proceedings of the National Academy of Sciences.

One thought on “Mitochondrial Dysfunction and Polo-Like Kinases”