Pancreatic cancer has one of the highest fatality rates of all cancers and is the fourth leading cause of cancer-related deaths in the United States; more than 35,000 people were estimated to have died from the disease in 2008. Patients diagnosed with pancreatic cancer typically have poor prognoses because the cancer is difficult to detect in its early stages – there are few symptoms and any that do present are vague and often go unnoticed. Although the exact causes of pancreatic cancer are not understood, the disease is more common in people with type 2 diabetes, although the reasons for this link are also unclear. 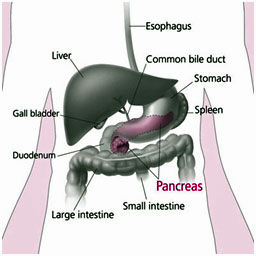 A recent study by researchers at the University of Texas M.D. Anderson Cancer Center has shown, however, that diabetics who have taken the anti-diabetic drug, metformin, alone or in combination with other drugs, have a 60% lower risk of developing pancreatic cancer compared with patients who have never taken it. Metformin is the most popular anti-diabetic drug in the United States and works primarily by suppressing glucose production by the liver and by increasing insulin sensitivity.

The study, which is published in the journal Gastroenterology, also suggested some increased risk of developing pancreatic cancer in patients who received insulin or insulin secretagogues, such as sulfonylureas and meglitinides. The study population was too small to determine the effects of another class of anti-diabetic drugs, the thiazolidinones.

The study evaluated prior use of antidiabetic drugs in just over 1800 people, 973 with pancreatic adenocarcinoma (including 259 diabetic patients) and 863 controls (including 109 diabetic patients). Use of metformin was found to be associated with a significantly decreased risk of pancreatic cancer compared with metformin non-use (adjusted odds ratio 0.38) whereas long-term insulin use was associated with a moderately higher risk of pancreatic cancer compared to insulin non-use (adjusted odds ratio 2.78). The association between pancreatic cancer and long term insulin use was, however, based on only 17 cases and 9 controls and needs to be investigated further in a larger study. The impact of insulin secretagogues on risk of pancreatic cancer likewise needs to be fully assessed in a larger study. Although it was not possible to gauge the effect of severity of diabetes or effectiveness of diabetes control on the results, the study does, however, show a robust protective effect of metformin, especially after long term use, against pancreatic cancer in people with type 2 diabetes.