Most animals and people experience itching from time to time, but the unpleasant sensation is usually short-lived and can be relieved by scratching. 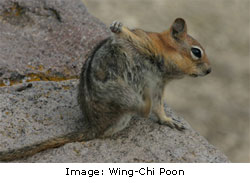 Itching caused by insect bites or allergic reactions can be treated with anti-histamines but, for some people, chronic generalised itching associated with conditions including eczema, psoriasis, liver or kidney disease, HIV and certain cancers, as well as the use of some drugs, is resistant to anti-histamine treatment and can be a debilitating condition.

Many scientists have regarded itching as simply a toned down version of pain but researchers at Washington University School of Medicine have now shown that itch-specific neurons exist in mice. Two years ago, the team identified the first ‘itch gene’ in the spinal cord. They showed that mice lacking the gene for the gastrin-releasing peptide receptor (GRPR) scratched less than normal littermates when exposed to itch-inducing stimuli. The team have now shown that if they destroy GRPR-expressing neurons in the spinal cord using a GRPR ligand conjugated to a neurotoxin (bombesin-saporin), scratching was reduced by more than 80% and, in some cases, eliminated completely. The mice showed normal motor control and continued to respond normally to pain, suggesting that there is an itch-specific neuronal pathway in the spinal cord. This is the first behavioural evidence for itch-specific neurons and could eventually lead to novel treatments which alleviate chronic itching without affecting the pain response.

The study was published online on August 6th in Science.