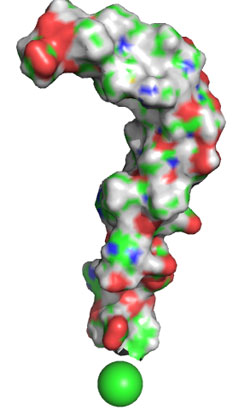 Although not without opponents – and still unproven – the theory that reducing levels of β-amyloid peptides will lessen neuronal damage and cognitive deficits remains a central tenet of Alzheimer’s disease research and the focus of many pharmaceutical companies. Last week, however, it was reported at the Alzheimer’s Association annual meeting in Vienna that Dimebon® (latrepirdine), a drug which has shown clinical benefit in people with mild to moderate Alzheimer’s disease, increases levels of β-amyloid in the releasate from isolated nerve terminals and in the interstitial fluid from the brains of transgenic mice bred to model Alzheimer’s disease. This unexpected result raises questions about how Dimebon® works and also, perhaps, about the validity of the ‘amyloid hypothesis’. One possibility is that the neuroprotective effects of Dimebon® are sufficient to outweigh the adverse effects of increased concentrations of β-amyloid. Preclinical studies have suggested that Dimebon® could prevent neuronal damage and dysfunction by stabilising or improving mitochondrial function. In addition, biochemical studies have shown effects on α-adrenergic receptors, histamine receptors and serotonin receptors as well as on Ca2+ flux and apoptosis. Alternatively, Dimebon® could cause an acute increase in amyloid levels, but lower levels on chronic dosing, or it could play a role in amyloid transport. Whatever the explanation for the present results, further investigations into the mechanism of action of Dimebon® and the relevance of animal models of acute amyloid lowering to human disease are of key importance.

Dimebon®, which has been used in Russia to treat hayfever since the 1980s, is being jointly developed by Medivation and Pfizer and is currently in phase III clinical trials.