Multiple sclerosis (MS), an autoimmune disease that results in damage to oligodendrocytes which maintain insulating myelin sheaths around nerve fibres in the central nervous system, is the most common disabling neurological disorder affecting young adults. The inflammatory process in MS is initiated by T-cells which recognise myelin as ‘foreign’ and attack it as if it were an invading virus. Disease-modifying agents are now available to treat MS but these are not effective for all patients and advanced forms of MS remain difficult to treat. Analysis of tissue samples from MS patients has revealed that two pathways more usually associated with blood pressure regulation – the renin-angiotensin system and the kallikrein-kinin system – are altered compared with samples from normal subjects. 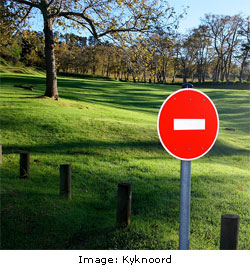 A team led by researchers in Berlin have now shown that the bradykinin B1 receptor specifically controls infiltration of immune cells into the CNS. In the mouse EAE model of MS, activating the B1 receptor resulted in reduced disease severity whereas blocking the receptor led to more rapid disease onset. The protective effect of the B1 receptor was found to be mediated by its expression on T-cells. In an in vitro model of CNS penetration, a B1 receptor agonist, R838, considerably reduced the number of migrated T-cells and additional application of a B1 antagonist, R715, restored migration. Analysis of immune cells from the CNS of mice with EAE revealed that, in mice lacking the B1 receptor, the proportion of infiltrating CD4+ T-cells was increased and, significantly, the proportion of TH17 cells – believed to be crucial for autoimmune neuroinflammation – was also greater. The study suggests that the B1 receptor acts as an endogenous modulator of recruitment of pathogenic lymphocytes into the CNS and limits harmful immune responses. The authors hope that selective B1 receptor agonists could one day play a role in the management of chronic inflammatory diseases such as MS.