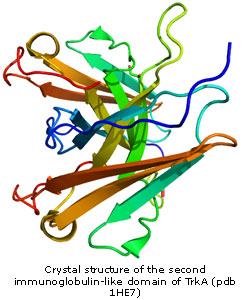 Neurotrophins – a family of proteins essential for the development, survival and function of neurons – exert their actions through two classes of receptor, Trk tyrosine kinase receptors and p75NTR. There has been considerable interest in using neurotrophins such as nerve growth factor (NGF) for the treatment of neuronal damage as well as for conditions such as stress and depression, but the use of NGF itself has been limited by poor CNS penetration and side effects such as hyperalgesia. This has led to a search for stable small molecules with neurotrophic activity and specificity for TrkA or TrkB receptors although, so far, none of the mimetics can fully reproduce the effects of NGF in animals.

Writing in the journal Chemistry & Biology, researchers at Emory University School of Medicine have now shown that the tricyclic antidepressant, amitriptyline, which had been thought to act predominantly by blocking serotonin and noradrenaline transporters, interacts directly with the extracellular domain of both TrkA and TrkB receptors. Amitriptyline induced TrkA and TrkB homo- and heterodimerization and activation in mouse brain, but heterodimerization was found not to be required for Trk receptor activation. Truncation of the amitriptyline binding motif on TrkA, but not the corresponding region on TrkB, abolished the receptor homo- and heterodimerization. Amitriptyline, but not other tricyclic antidepressants or selective serotonin reuptake inhibitors, promoted 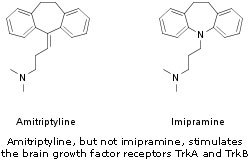 TrkA autophosphorylation in primary neurons and induced neurite outgrowth in PC12 cells. In mice, amitriptyline was further shown to suppress neuronal apoptosis caused by the neuroexitotoxin, kainic acid, in a TrkA-dependent manner. Inhibition of TrkA, but not TrkB, abolished the neuroprotective effect of amitriptyline without affecting its antidepressant activity.

Amitriptyline was found to bind to a motif in the first leucine-rich motif of the extracellular domain of the TrkA receptor with a Kd of 3 µM, which approximates to the brain concentration achieved when used to treat depression or neuropathic pain. Although significantly lower than the affinity of NGF for TrkA, it suggests that amitriptyline affinity for TrkA might be sufficient to explain at least some of its biological activity.