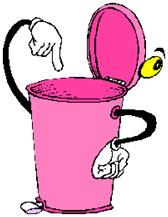 Although the ubiquitination pathway in eukaryotes was characterised in the early 1980s, it has only recently been recognised that bacteria also tag proteins to determine their fate. Ubiquitination controls a variety of cellular processes, but one of its major roles is to label proteins for degradation by the proteasome. In Mycobacterium tuberculosis (Mtb), the small ubiquitin-like protein that targets other proteins for proteasomal degradation is called prokaryotic ubiquitin-like protein (Pup) and, because proteasome function is essential for the Mtb virulence, interruption of the Pup pathway could potentially be a target for anti-tuberculosis drugs. Writing in Nature Structural & Molecular Biology, researchers at the Institute of Molecular Biology & Biophysics of ETH Zurich have now described an enzyme called Pup deaminase (Dop) that is involved in the Pupylation of proteins in Mtb. Dop modifies Pup by deaminating the C-terminal glutamine to glutamate and the Pup ligase, proteasome accessory factor A (PafA), then couples the modified Pup to the ε-amino group of lysine residues in the target proteins. This formation of an isopeptide bond requires hydrolysis of ATP to ADP, suggesting that the C-terminal glutamate of the modified Pup is activated for attachment via phosphorylation.

Since the Pupylation pathway differs from the ubiquitination pathway, drugs targeting the bacterial Pup pathway may offer the potential for safe and effective treatments for Mtb.