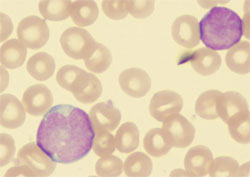 T-cell acute lymphoblastic leukaemia (T-ALL) primarily affects children and adolescents, and is characterised by a high rate of infiltration into the central nervous system. Aggressive treatment using cranial irradiation and intrathecal chemotherapy to prevent CNS involvement has improved survival outcomes but at a high cost to patients – side effects can include secondary brain tumours, delayed development and mental retardation. The severe consequences of available treatments to prevent CNS involvement in T-ALL have driven a search for genes and signalling pathways involved in CNS infiltration.

CCR7 was already known as a key player in normal lymphocyte migration and adhesion, and as a binding partner of two chemokines, CCL19 and CCL21. Previous studies had also implicated these receptor-ligand interactions in the metastasis of tumours such as melanomas and breast cancers, and anti-CCR7 antibodies had been shown to block the migration of chronic lymphocytic leukaemia (CLL) cells. Scientists at NYU School of Medicine have now shown that CCR7 is also essential for infiltration of T-ALL cells into the CNS.

The Notch1 signalling pathway is essential in T-cell development and earlier research had linked mutations in Notch1 with the progression of T-ALL. In the new study, the team found that mice expressing overactive forms of Notch1 developed leukaemia and, moreover, that the leukaemia cells efficiently infiltrated the inner layer of the membrane covering the brain. Using gene-expression profiling, CCR7 gene expression was found to be controlled by Notch1 and CCR7 itself to be essential for CNS infiltration. Silencing either CCR7 or one of its cognate ligands, CCL19, in an animal model of T-ALL specifically inhibited CNS infiltration. Mouse brain infiltration by human T-ALL cells was also found to be dependent on CCR7 expression. In four out of five T-ALL cell lines derived from human patients, the gene for CCR7 was found to be upregulated, providing further evidence for its role in the disease. The identification of a single chemokine receptor as necessary and sufficient for CNS infiltration suggests a new possibility for reducing the complications associated with aggressive CNS-targeted therapy for T-ALL using small molecules, antibodies or RNAi directed against CCR7.

The study is in the June 18th issue of the journal Nature.