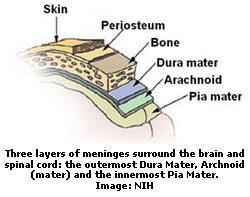 Meningitis – infection of the cerebrospinal fluid and protective membranes surrounding the brain and spinal cord – can be caused by infection with either viruses or bacteria. Viral meningitis is typically relatively mild and self-limiting whereas bacterial meningitis is much more serious and can result in severe brain damage or even death. Bacterial meningitis in children is almost exclusively caused by infection with one of three bacterial strains: Streptococcus pneumoniae, Neisseria meningitidis, or Haemophilus influenza. Exactly how these bacteria are able to breach the blood-brain barrier and cause infection was not understood, but researchers from the University of Nottingham and St. Jude Children’s Research Hospital have now discovered that all three pathogens use the same receptor on human cerebrovascular endothelial cells to begin the process of crossing the barrier. Bacteria need to have some way of fixing their position and becoming established and use attachment molecules – known as adhesins – to achieve this. 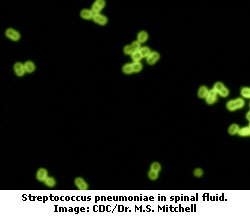 Some bacteria take the attachment process a stage further and use the adhesins as a first step towards gaining entry into host cells. It was known that the three bacteria responsible for most cases of meningitis share the same strategy for the second step of crossing endothelial cells and the new study has shown that they also use the same host cell receptor, the laminin receptor, for initial attachment. Other infectious agents known to use the laminin receptor to gain access to the CNS include prions and some neurotropic viruses, although the interaction of the laminin receptor with bacteria appears to be somewhat different to that of other pathogens.

The study suggests that blocking the interaction between bacterial adhesins and the laminin receptor might offer broad protection against bacterial meningitis and may lead to better treatments and prevention strategies. The study is published in full in the Journal of Clinical Investigation.