Despite enormous efforts worldwide, there is still no effective way to prevent transmission of HIV-1. Some non-human primates produce θ-defensins (retrocyclins), which act as HIV-1 entry inhibitors by inhibiting fusion of HIV-1 Env. 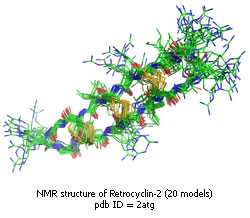 In humans, however, θ-defensin genes have a premature stop codon that blocks translation. Defensins are small cationic, tri-disulfide bonded peptides expressed by leukocytes and epithelial cells that contribute to immune defenses against bacterial and viral infections. In primates, there are three sub-families of defensins, α-, β-, and θ-, classified on the basis of cysteine position and disulphide bonding pattern. In rhesus macaques, formation of θ-defensins, which are 18-residue cyclic peptides and the only known cyclic peptides in mammals, involves post-translational head-to-tail ligation of two nonapeptides. It was not known whether this process could occur in human cells, but researchers at the University of Central Florida, working with scientists from the University of California and the Centers for Disease Control, have now demonstrated that human cells retain the ability to produce retrocyclins and have further used the aminoglycoside antibiotics, gentamicin and tobramycin, to read-through the premature stop codon found in the mRNA transcripts and induce synthesis of bioactive retrocyclins. Although much more work needs to be done to demonstate the safety and effectiveness of this approach, the study provides hope that topical aminoglycoside-based microbicides – or other compounds that allow read-through of the stop codon –could one day be used topically to prevent sexual transmission of HIV-1.

The study is published in full in PLoS Biology.