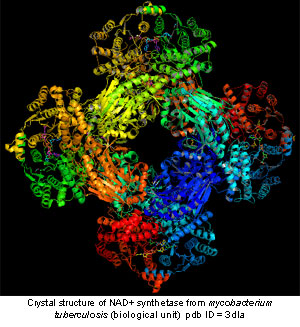 The World Health Organisation estimates that one third of the world’s population is latently infected with Mycobacterium tuberculosis (MTB), and that ten per cent of infected individuals will develop active disease. Current treatments for tuberculosis are effective only during active infection, and the emergence of drug-resistant strains of MTB is compromising the efficacy of existing drugs. Nicotinamide adenine dinucleotide (NAD+) synthetase is an attractive target for control of MTB since the enzyme is essential for survival of both active and latent mycobacteria, but drug discovery efforts against this enzyme have so far been hampered by a lack of structural information.

University of Maryland scientists have now characterised the structure and mechanism of the MTB synthetase and hope that their work will facilitate the discovery of new drugs that will be able to combat both latent and active MTB infections. All living cells need the coenzyme, NAD+, which regulates many physiological processes including redox reactions. A number of biochemical pathways are able to synthesise NAD+ but, since MTB has only two pathways – both involving NAD+ synthetase – and humans have pathways that avoid NAD+ synthetase, an inhibitor of this enzyme should be effective against MTB but have minimal side effects.

The MTB NAD+ synthetase is a multifunctional enzyme which catalyzes the ATP-dependent formation of NAD+ at the synthetase domain using ammonia derived from L-glutamine in the glutaminase domain. The study, which is published in full in Nature Structural & Molecular Biology, revealed a homooctameric subunit organization, suggesting a tight dependence of catalysis on the quaternary structure.