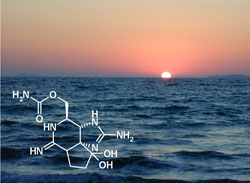 A new slow-release anaesthetic drug-delivery system could potentially revolutionize the treatment of pain during and after surgery, and may also have a large impact on chronic pain management. Researchers at Children’s Hospital Boston have developed a liposomal delivery system for the ultra-potent local anaesthetic, saxitoxin. Saxitoxin is one of a family of neurotoxic alkaloids produced by aquatic microorganisms which block voltage-gated sodium channels on nerve cells. In studies in rats, liposomal delivery of saxitoxin blocked sciatic nerve transmission without causing significant nerve or muscle damage. The team found that liposomes containing only saxitoxin produced nerve blocks that lasted for two days whilst liposomes containing saxitoxin together with dexamethasone – a steroid known to enhance the action of encapsulated anaesthetics – caused a nerve block that lasted for seven days without significant damage to surrounding nerves or muscle. Despite the extreme potency of saxitoxin, systemic toxicity occurred only with high loadings of dexamethasone which increased release of the anaesthetic. Previous attempts to develop slow-release anaesthetics have been limited by short duration of action, toxicity to the surrounding tissue and/or systemic toxicity. The team hope that eventually a single injection that could cause a nerve block lasting for weeks – or even months – could be used to manage chronic pain and are optimising a formulation that would be suitable for clinical trials.

The research is published in the April 13th online edition of PNAS.