The first scientific discovery made independently by a robot has just been reported. 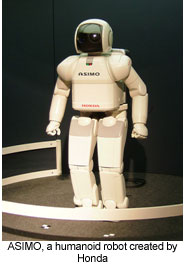 The robot, named ADAM, was developed by scientists at Aberystwyth and Cambridge Universities. Rather than a humanoid robot like Honda’s ASIMO, scientist ADAM is actually a fully automated robotic laboratory that can formulate hypotheses and then design experiments to test them. ADAM was set to work to identify genes responsible for producing orphan enzymes in yeast. Using existing knowledge and algorithms programmed by human scientists, ADAM came up with hypotheses about the genes encoding the enzymes and, without any further intervention, selected yeast mutants to carry out cell growth experiments to test his theories. ADAM was able to confirm 12 out of 20 hypotheses and trace the previously unknown genes responsible for producing the yeast enzymes. One of the orphan enzymes is involved in the synthesis of the amino acid lysine and, although it has been suggested as a target for fungicides, no one had previously identified the gene. Adam was able to suggest three possible candidate genes and all were found to produce an enzyme capable of catalysing the correct reaction.

Although robots like ADAM may never don a lab coat and join their colleagues at the bench, as automated systems develop it is likely that they will play an increasing role in making new scientific discoveries, especially those needing repetitive experiments and the manipulation of large data sets. The next robotic scientist, EVE, is being created specifically to help search for new drugs to treat tropical diseases such as malaria and schistosomiasis.