Liquorice, which is used as a traditional medicine, a culinary spice and an ingredient of confectionary, is an expectorant and mild laxative, has antiviral properties and also increases blood pressure at high doses. One of the active ingredients of liquorice-root extract is the natural sweetener glycyrrhizin, which is over 50 times sweeter than sucrose. Two recent reports describe additional properties of liquorice. 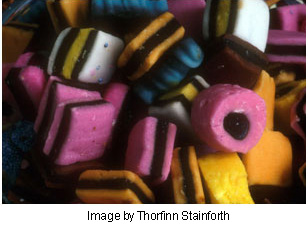 Writing in the Journal of Clinical Investigation, researchers at Vanderbilt University Medical Center suggest that glycyrrhizic acid may offer a new approach to preventing colorectal cancer (CRC), the second leading cause of cancer deaths in the United States. Prostaglandin E2 (PGE2) has been shown to promote CRC progression and both non-selective cyclooxygenase (COX) inhibitors and selective COX-2 inhibitors, which block production of PGE2, reduce the number and size of colonic adenomas. Although COX-2 inhibition, which reduces the number and size of colon polyps in both mice and patients with a predisposition to colon cancer, is a promising target for chemoprevention of CRC, both non-selective NSAIDs and selective COX-2 inhibitors have side effects that limit their prophylactic use. The Vanderbilt team had previously shown that inhibiting 11β–hydroxysteroid dehydrogenase type II (11βHSD2) in the kidney suppresses COX-2 expression and, since the colon is one of the only other organs with high expression of 11βHSD2, speculated that this enzyme might play a role in colorectal cancer progression. Expression of 11βHSD2, which converts active glucocorticoids to inactive keto-forms, was found to be increased in polyps found in both mice and humans and correlated with COX-2 expression and activity. Inhibition of 11βHSD2 with glycyrrhizic acid was found to inhibit COX-2–mediated PGE2 production in tumours, and to prevent polyp formation, tumour growth, and metastasis in mice. 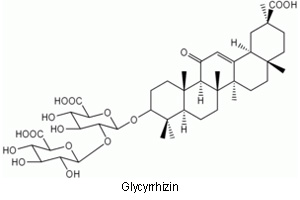 Chemists in Taiwan have also recently warned that both glycyrrhizin and liquorice extracts can block the absorption of cyclosporine, a drug used to prevent rejection of organ transplants and as a treatment for rheumatoid arthritis. Speaking at the annual meeting of the American Chemical Society in Salt Lake City, Dr Pei-Dawn Lee Chao described how levels of cyclosporine were reduced in laboratory rats when co-administered with liquorice. Although it is not known how much liquorice would have to be eaten to have a similar effect in humans and the mechanism of the effect is not understood, this study adds to a growing number of reports that liquorice can trigger potentially dangerous drug interactions.