Loss-of-function mutations of human DJ-1/PARK7 are associated with autosomal recessive, early onset Parkinson’s disease. In contrast, amplification of DJ-1 has been observed in numerous tumours and its expression correlated with poor prognosis. Experimental data suggest that DJ-1 contributes to cell survival by enhancing the phosphorylation of Akt, resulting in inhibition of PTEN function. Further data support a role in protection from oxidative stress – knock-out of DJ-1 enhances hydrogen peroxide mediated cytotoxicity. 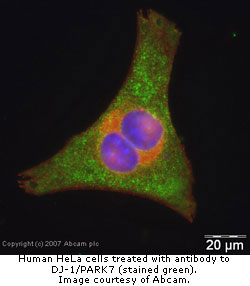 Researchers have now identified DJ-1 as an upstream activator of hypoxia inducible factor-1(HIF1) function in cancer cells, conferring resistance to hypoxia-induced apoptosis. HIF1 is a transcription factor that plays a key role in a tumour’s ability to adapt under hypoxic conditions, critical for survival and progression. The authors’ experiments demonstrate that loss of DJ-1 in human cell lines decreases transcription of all HIF1-responsive genes examined and that expression of DJ-1 is critical to the activities of Akt and mTOR that are required to maintain HIF1 stability. In addition, DJ-1 has been shown to regulate the activity of the metabolic sensor, AMPK.

The authors conclude that their results strengthen the case for therapeutic intervention at the level of DJ-1 in cancer cells. It will be necessary, however, to consider the loss-of-function consequences. The full study is reported in the January 27th issue of PNAS.